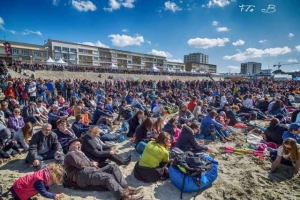 It was Saturday afternoon, the first day of the Berck-ser-Mer kite festival. We were watching one of the kite teams fly a demo along with a sea of maybe fifty thousand people who also looked on. Mark Lummas our team leader leaned over and asked “what do you think of Berck now?” The only word that came to mind was “awestruck”. We were awestruck. The massive scale of the event, the attention to detail, the people all combined to dwarf anything in our experience.

We know people who have attended the Berck kite festival. They previously described it to us. It sounded big. It sounded grand. But in our minds it just sounded like another festival only bigger. As a first timer we now have to say it is NOT just another festival. It is in a league of it own or at least a very select league. As we looked out at the many tens of thousands of people watching the demos that first Saturday we couldn’t help but feel that if all the kite festivals in North American were held on the same weekend on the same beach they still would fall far short of Berck. And as we took the field to fly our own demo it was difficult to think of it as “just another demo at just another festival”. 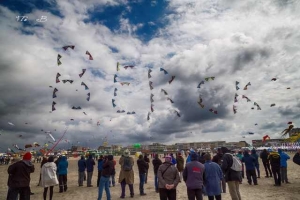 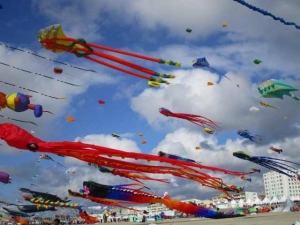 The central arena where competition is held and demos are flown is surrounded. The first thing one notices is the people surrounding the arena. More than we’ve seen anywhere except at a football game. Then there are the kites. Huge kites and lots of them. Dragons, whales, mantra rays, octopus. The list goes on and on. And that’s just on one end of the arena. On the other end, well on the other end it’s more of the same. A sky full of kites, big kites and bigger kites.

Turning and looking out toward the ocean there are dozens and dozens of people flying on the beach. Teams, families, children, quad line, dual line, single line. Small groups of people are gathered around watching the teams fly. Large groups are watching as the quad line fliers practice for the mega fly. Everywhere there are people enjoying the day, the beach, and the kites. 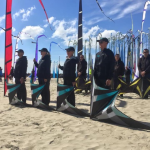 Berck is more than kites and a beach though. It’s a charming town with good restaurants, bars, coffee shops, patisseries, and shops. It’s probably a combination of the town and the festival that keep the French returning year after year. We know we would if we lived in France.

After experiencing the Berck kite festival for ten days we were repeatedly struck by the extraordinary degree of planning that must be required to pull off something of this magnitude. Everything is accounted for and managed superbly. Sheds for the fliers gear. Massive tents. Lunches and sometimes dinner for hundreds of people. A sound system fit for a Katy Perry concert. Socials where the competitors meet one another. The list goes on and on. But from where we stood not one thing was lacking or could have been improved upon. A big thank you to Gerard Clement, the organizer of the festival. 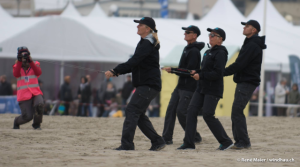 Every other year Berck is home to the World Sport Kite Championships This was one of those years. Thirteen teams from around the world came to Berck to test their skills against one another. Every team was comprised of proven competitors. People who wanted to do well, who wanted to “beat” the other teams. But every team was also comprised of people who understood the difficultly of the competition and could also support one another. In spite of the importance of this biannual event we did not see a single act of cut throat competition. Instead we saw teams cheering each other on during the awards ceremony and on the flying field. It made us proud to be members of the kiting community.

We cannot talk about Berck-ser-Mer without talking about the night fly. It occurs on the last Saturday night of the Festival. For those lucky enough to attend it’s something you’ll remember always. Why? Because it is like everything else at Berck. It’s a massive, over the top spectacle that takes your breath away. Big kites are everywhere lit by giant search lights that scan the sky. Large helium filled fish lighted in blue, red, and orange swim through the air. Lighted Quad and dual line kites fly synchronized maneuvers. Dozens of colorful banners are lit and flap in the wind.

And as the wind dies and the kites slowly float to the ground the fireworks start. The fireworks show consists of a finale that spans the entire show from beginning to end. It’s backed by a powerful, emotional soundtrack playing throughout the beach and boardwalk. We’ve seen a lot of fireworks shows. But we’ve never seen anything like this. Not even close. It was the perfect end to a great week.

So as we are getting ready to depart for home from this wonderful experience we carry with us the memories of events and people that will hold us until we return again.
Cass and Carol Pittman 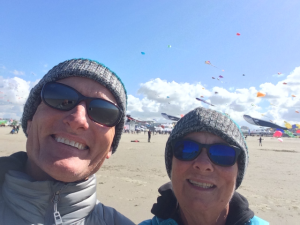