I arrived a day behind everyone else in France. My flight out of Portland boarded smoothly. We taxied out to runway, turned into the wind and the pilot hit the gas. But halfway down the runway, as the nose started to leave the ground, he hit the brakes hard. Red warning light!!

Twenty years of flying and I’ve never had a take-off actually aborted. The flight was scrubbed and I spent the night in PDX waiting for a working connection.

The good news is that my flights the next day were smooth, my bags came out first in Paris, and a car was waiting to whisk me off to the festival. Voila! Tre bon!!

WSKC has evolved into a partnership between myself as general chairman, and Gerard Clement as local organizer. He handles the fields, the lodging, the transportation and the budget. I coordinate invitations and judge selections. We work closely with AKA, STACK and AJSKA to make sure the rules are consistent, and the flier organizations appoint their best teams and officials

Two years ago, there were a mere eight teams on the field. This year, thirteen were expected. That included six from France, and new entries from Russia and Lithuania. One team came from the USA and one from South America. For the second time in a row, Atemoc cancelled at the last minute for lack of visas….

Here’s a look at the line-up.

*** “Exhibition” teams were invited to participate in ballet this year and were scored, but not eligible for awards. One team accepted.

Early in the week, winds are wet and cold here. Strong too! We flew bravely on Saturday and Sunday, then hunkered down Monday through the cold rain and 40-plus gusts. Tuesday, for the start of competition, the sun came out and pleasing breezes of steady 8 came down the beach.

The top performers were no surprise — Scratch Bunnies, Start’Air, and Red Bull. The same three battled two years ago for similar rankings. However, this year, the Bunnies were flying with four rather than six. And there were several other developments in store. First day results give some hint of what was to come. 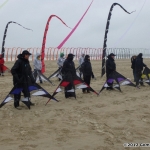 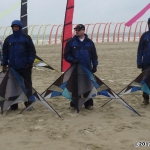 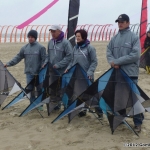 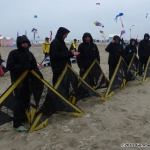 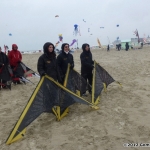 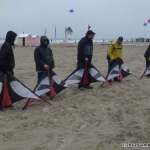 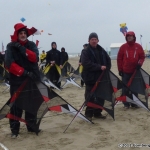 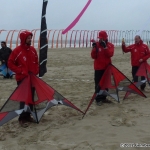 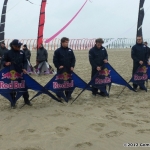 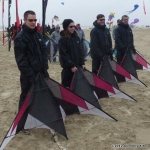 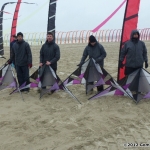 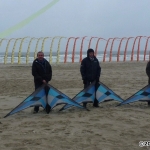 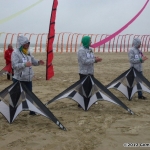 The Tuesday results were so close that officials decided to withhold the names with top scores and maintain some suspense.

Almost as soon as scorekeeper Susan Skinner posted results, they were published on FaceBook. Fliers crowded the wall with cameras and calculators trying to sort out the situation.

Fortunately, I knew what was really going on.

Raw data tells you some things. But it doesn’t tell you everything. Here are a few of the things I saw.

Final results are known only to the judges and chairman. They will be released with the trophies on Saturday. For now, the pressure of competition is over and the joy of exhibition is here. 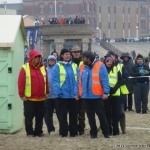 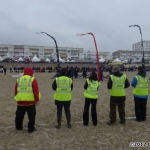 Watching the teams and staff interact is showing the WSKC to be something really special. Separated by country and culture, we share the common language of flight. Common rules help too! The event is a well-oiled machine that runs smoothly. The only surprises are in the air.

My own goals are to see the bi-annual contest shift to Asia where the real growth in sport kiting is being seen. Will the international organizations and IRBC find the wherewithal to cooperate and fly together? Surely the “west” will need to compromise some practices to accommodate the norm in other regions.

We went thought this when AKA, STACK, and AJSKA merged. But the results are worth the effort!

The other issue is of course money. Here in France, eleven teams drove to the event. On other continents, the cost of travel will be a deterrent. But that may well be offset by a number of new competitors from China, Malaysia, Japan, Singapore or Taiwan. Imagine what we could learn from each other….

Here are the final WSKC results:

It you have suggestions for a 2013 site, with 40 donated hotel rooms for four nights, food, and travel money, please let me know!!