Bright sunny skies and cold blasting winds greeted the eight competition teams that gathered in Berck for the World Sport Kite Championships. How blasting? We measured gusts up to thirty. How cold? Don’t ask.

Eight teams was fewer than past Championships. Returning champions Air Rex were unable to get the extended vacation time. Atemoc emailed just days earlier to report they had been unable to get visas. And only one team from the USA accepted. But while quantity was lacking, we had no concern about the quality of level of competition. 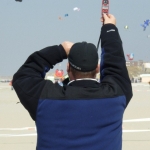 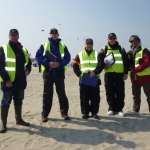 WSKC has evolved into a partnership between myself as general chairman, and Gerard Clement as local organizer. He handles the fields, the lodging, the transportation and the budget. I coordinate invitations and judge selections. We work closely with AKA, STACK and AJSKA to make sure the rules are consistent, and the flier organizations appoint their best teams and officials.

Day one started well with the wind coming straight and hard down the beach. There was some turbulence on the inside edge and teams were challenged with speed control in the extreme conditions. Vented kites and devices were everywhere.

Precision maneuvers were Pick Up Sticks, Team Hairpin; and Follow, Flank Up, and Square.

All teams were challenged by the hard winds and required ground maneuvers. The Bulls and the Bunnies did best, with Start Air close behind.

Ballet was more of a surprise. Six-Man Scratch Bunnies ran way ahead of the pack. Ten points behind but in solid second was Airzone. Their performance suffered as a kite broke two thirds through the routine but soldiered on. Without that heavy-wind mishap, Airzone might have done much better. Start Air took third and Red Bull was in mid-pack with fourth

The day ended with Bunnies in First and Bulls in second. 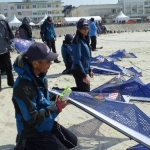 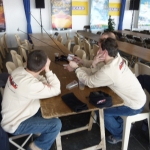 Todays flights will define the competition. Will Scratch Bunnies retain their lead? Will Airzone perfect their ballet and move up? Will Red Bull find their ballet mojo? Since teams count only their best two-of-three performances, anything could change. The morning is cloudy and colder. And the winds are still strong.

WSKC has a rich heritage. Sky Dance, Cutting Edge, Overdrive, and Air Rex have established standards by which other performers are judged. Who will be the next champion??

Bunnies and Bulls virtually tied in Precision with Start Air a few points behind. Maneuvers were as hard as ever: Arch de Triomph, the Basket, and Team Square Cuts.

In Ballet, the Bulls did indeed move up. Their score was a full six points higher than the day before. But Scratch Bunnies continued to lead by a comfortable margin. As the dust settled on the competition field, it remained Bunnies, Bulls, and then Start Air.

Thursday will be the final competition day. And as reported earlier, lowest scores for all teams are dropped to calculate the final rankings. It isn’t over yet. But patterns are developing. Third and final round tomorrow! 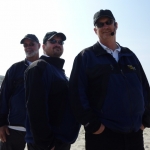 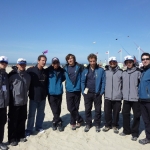 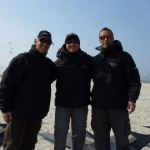 This will be the final day of competition. We’re all watching the top three, but for some, the rewards are further down the list. Freaks, the family team from Argentina, did well in Precision Wednesday. They improved their score by a full ten points and moved up from 6th to fifth. Flame of the UK did better as well, moving up two places inn the rankings.

Ballet and Precision are equally weighted in the results. But Ballet definitely provides the better show. Thousands crammed the seawall thru the week to watch performances.

We have posted the top four ballets. How would you rate them??

Thursday provided the best winds of the week and an incredible show up and down the beach. Competition teams were performing at the peak.

The most interesting news was Start Air inching into second place on the strength of a very strong Precision flight.

The award banquet Friday night was a celebration for all of the competitors and staff. The event had run smoothly and well, and fliers felt they had shown their best. Results were much as expected — Scratch Bunnies, Red Bull, and Start Air. it is worth noting that the Robertshaw Brothers on the Bullines, won the World Cup exactly 15 years ago.

The cheers were loud for the winners and the trophies enormous! it may have been a reprieve that they all stayed in Europe. The awards were much too large to take through airport security.

Speaking of airports, the trip home is now clouded with ash (pun intended). All airports in Northern Europe are closed because of the Iceland volcano eruption. We hope to fly home Monday. Check next week’s Update and find out how the story ends.