For seven years, the WSKC has worked hard to cooperate with AKA, STACK, and AJSKA – the leading sport kite organizations in the world. We have used universally accepted rules, recognized judges, and recruited the champion teams from across North and South America, Europe, and Asia.

But now other kite competitions have begun to use the “world champion” label without attention to the rules, involvement of kite organizations, or inviting the best flying contestants.

Gerard asked the fliers and officials gathered in Berck sur Mer for the competitions to support a true world championship. Kiters in the room responded with an ovation.

Gerard, as event organizer, began the meeting, and then turned it over to me as organizing committee chair. I explained that it was Gerard’s job to provide the fields, transportation, lodging, infrastructure and money to make the event possible. My job was to select an organizer, recruit the judges, issue invitations to the teams, and oversee rules.

I summarized that I got the fliers there, and Gerard provided the electricity. That got a laugh since the surprise snowfall had knocked out power in the entire region.

I then introduced the thirteen teams representing seven nations. 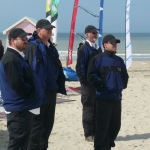 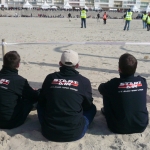 Competitions were scheduled Tuesday through Thursday with each team flying precision in the morning and ballet in the afternoon. The best two scores in each discipline were combined to generate an overall result. 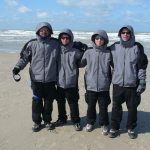 Snow melted overnight and the skies were a clear sharp blue. Winds were light in the morning, which challenged the first group of performers. Wind checks and delays slowed the flying. But after lunch the wind turned to present reasonable flying conditions.

Overall, the quality of flying by the lower ranked teams – particularly from South America – appeared much improved. Those fliers had come to WSKC before and learned something. On the other hand, many of the higher ranked teams seemed less improved.

Air Rex of Japan proved a formidable force on the field. They flew with three in precision and five in ballet. Scratch Bunnies launched six kites in ballet for an electrifying performance but their numbers may have hampered execution scores. O4 of France, WATNU from Germany, and Start’Air of France were solid and impressive.

Top scores were in the mid-seventies for precision and mid-eighties for ballet – generally a bit lower than 2006.

Check out the first day ballet performance of Air Rex.

The show here is about the afternoon events flying to music. But the results are based half on precision. And the morning winds have ranged from zero-to-lousy each day.

Fortunately each team gets to fly three times. So hopefully they each get a fair chance to show their best. But the fact is that in challenging conditions, a later flight time, or a lucky choice of kites in changing winds can make a huge difference.

Afternoon flying conditions were perfect. The wind was a steady ten off the water and the sky was a cloudless blue. Virtually every team increased their scores over the first day. 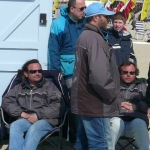 AKA’s 6th Sense moved up into the TBA category. They may well have taken first in precision today, and fly last tomorrow – after the winds come up.

Air Rex continues to dominate. I’ve seen seven of eight World Cups. I’ve seen all the great teams – Top of the Line, High Performance, Airkraft, Sky Dance, Overdrive and Cutting Edge. The Japanese here in Berck demonstrate the same focus and determined pursuit of perfection. They are a five member flying machine and spellbinding to watch.

Who will take the other top spots is hard to say. Here are the scores from today.

Chief Judge: Andrew Taylor (STACK), and judges Jim Barber (AKA), Russ Faulk (AKA), Jurgen Schneider (STACK), and Seiji Kato (AJSKA) have their work cut out for them. Field Director is Monica Barber and scorekeeper Tracy Erzin.

Check out the second day ballet performance of Scratch Bunnies.

Check out the second day ballet performance of Ninja.

You can see from the photos that the weather is nearly perfect. The wind is 7-10 and right off the water. That means the buildings downwind provide a perfect horizontal grid for maneuvers in the lower half of the window.

Check out the Air rex video again and watch how amazingly straight their flight is. And remember that as you cross from downwind toward the edge, you need to compensate to stay level like this. Remarkable stuff! 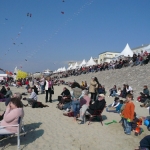 It is good to see the best teams performing in ideal conditions. Everyone is turning in optimal performances and scores continue to increases each day.

6th Sense was spot-on in precision which should bring them up quickly in the rankings. It pays to practice those maneuvers!!

We’ve now posted complete scores for all teams on each day so you can see the progress. Everyone flew very well and can be proud to be here. Not everyone earned “wood” but all were champions!! 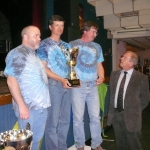 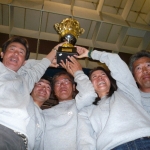 Final results were announced Friday evening at the gala banquet. As I explained before, the results were based on the best two performances in both ballet and precision.

Check out the third day ballet performance of WATNU.

Check out the third day ballet performance of 04.