In 1999, the powers-that-be in the world of sport kiting started serious work to revive the tradition of American Kite’s World Cup championship events. It took three years for their work to bear fruit; the first of the “new generation” championship events was held at Berck-sur-Mer, France in April, 2002.

The first event was a great one, but certainly not because of a close finish. France’s Overdrive simply blasted the field, winning by a dozen points. The top AKA team was Legend, with a fine 4th place finish.
In 2003, Overdrive topped the field again, but with only half the margin of the previous year. Team SPI, the only AKA team to make the trip, finished 8th. 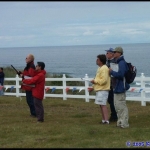 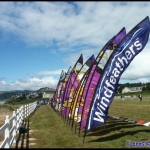 The 2004 event saw a new team on top, after the retirement of Overdrive. From France, Element’ Air took the big trophy; though once again, the margin was cut in half from the previous year! Team Cutting Edge was the top AKA team, placing 3rd. So, looking at the first three WSKCs, the margin of victory were 12, 6, and 3 points. Would the 2005 event see this trend continue? Would Team Cutting Edge, AirZone, or 6th Sense be able to challenge the French juggernaut?

In 2004, Ocean Shores, WA and Lincoln City, OR submitted bids to host the event. After careful consideration, Lincoln City was selected to host the 2005 WSKC. Sandy Pfaff, Ron Sears, and the rest of the LC crew did a fabulous job of securing the funding and support to ensure that the event would be a real winner.

The venue was to be on the grounds of the Chinook Winds casino, on a bluff 50 feet over the beach.

The three flier’s associations — AKA, STACK (Europe), and AJSKA (Japan) — each selected fliers and officials for the event. The final field consisted of 15 teams, representing seven countries (US, France, Japan, Germany, UK, Colombia, and Malaysia).

When the participants arrived at the arena on Monday, June 20, they were greeted by a well-decorated field, surrounded by vendor tents and spectator areas. Dinner at the field that evening was followed by a night of anxiety among the competitors.

Each team was assigned a brief period in the morning to test the wind conditions and set their strategies. After a noon-time lunch briefing, the field was set, it was time to start determining a new world champion.
The WSKC uses an unusual competition format — each team will fly ballet and precision three times, with each team’s lowest score in each discipline thrown out. So, a bobble isn’t necessarily fatal to a team’s chances; but a second one could be!

At 1:00, the first flight of ballet was kicked off. In the early part of the flight order, Japan’s Air Rex turned in a fine performance, with great execution and very crisp choreography. About midway through the order, Tame Bird (France) flew a riveting ballet full of thrills and gasp-inducing tricks. Along with the thrills came a few spills, however. Flying in the final position, Team Cutting Edge flew a fine routine, a trick or two short of Tame Bird’s, but with ultra-clean execution and every opportunity for choreographing a beat taken advantage of.

The judge’s scores were posted after each competitor’s performance, and the final standings showed Cutting Edge on top, five points ahead of second-placed Air Rex. Tame Bird showed third, with AirZone (US) in fourth, Element’ Air (FR) in fifth. That evening, the members of Cutting Edge were smiling, but knew that they were only partway home. Their plan was to use flawless execution to take away any technical advantage that other teams may have.

This was to be the first of two long days, with precision in the morning, and ballet in the afternoon — about seven hours of competition in total.

The wind rolling over the top of the bluff at the back edge of the arena created some tricky flying conditions, particularly close to the ground. As would be the case for the rest of the week, many teams seemed to be hard-bitten by the conditions, while others refused to bow to them. The results of precision showed who could best take care of business — Watnu (GER) in third (74.96), Cutting Edge in second (80.78), and Tame Bird taking a close win (81.84). Of note, Watnu bucked the trends in their equipment choice for precision. While every other team flew high-tech kites that were efficient and silent, Watnu sported noisy, but stable North Shore Radicals, a kite that ruled the roost in the early 90’s but is rarely seen in the competition arena today. The crowd loved the noise!

The afternoon ballet saw simply glorious conditions, with sunshine, and smooth 8-10 mph winds — a perfect stage for the teams to show their best. And show their best they did! 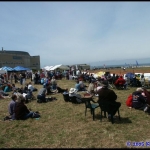 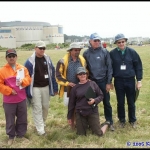 Each of the top-five teams left the field with grins on their faces, as an appreciative audience cheered wildly to show their appreciation for a wonderful display of kiting magic. The judges placed Watnu in fifth (74.36), 6th Sense (US) in fourth (75.88), Air Rex in third (79.40), Tame Bird in second (88.12), with Cutting Edge taking an ultra-close win (88.32).

With the event half over, it was apparent that we were seeing the closest battle in the history of the WSKC taking place.

Thursday was the second of the long days, with precision in the morning, ballet in the afternoon, same as the previous day.

Weather conditions were nowhere near as beautiful as the day before — a chilly, bumpy wind whistling through overcast skies would separate the contenders from the pretenders.

In the precision discipline, each team had to execute three exacting compulsory figures, and then display their technical skills in a freestyle routine. Many teams had difficulties with the conditions; with mid-air smacks and kites rolling on the ground being common events. When the smoke (and carbon bits!) settled, Cutting Edge took a convincing five point victory over Tame Bird. This result put the pressure on Tame Bird — they would have to dominate Friday’s final precision event to have a hope of winning, assuming that this day’s ballet results were similar to the previous two ballet results.

The ballet competition saw wind conditions slightly degraded from the morning. With this being the final ballet, and in the worst conditions of the week, team’s strategies varied, depending on their finish in the previous two ballets (remember, the low ballet score gets dropped). Most teams needed to play it conservatively, and avoid getting heavily dinged for crashing in the tough winds. On the other hand, Tame Bird and Cutting Edge could throw everything they had at it — they had both posted two strong scores previously, and today’s conditions were unlikely to provide higher ones.

And that’s what happened! Tame Bird flung it all into the fire — team flick-flacks, what seemed like dozens of landings, all with flair and excitement.

Cutting Edge pushed it hard as well, lighter on the trickery but with a level of execution that was clearly ahead of Tame Bird’s.

With only a final precision discipline to go, things looked good for Cutting Edge, though they didn’t have an absolute lock on the crown. With low scores thrown out, Tame Bird had a combined ballet score of 81.94, Cutting Edge was at 84.64. For Tame Bird to pull off an upset, they would have to top Cutting Edge by about ten points on Friday.

At this point, third place was up for grabs among a large handful of teams.

Friday’s improved weather conditions set the stage for the conclusion of this rendition of the WSKC.

Several teams had unfortunate incidents. AirZone had a broken line on a wind tamer and suffered their second heavy penalty of the week. Scratch Bunnies (UK) also suffered a broken line, but used a brilliant bit of fieldcraft to make the crowd go nuts and minimize the impact on their score. When the line broke and one kite went into rapid spins, the other two kites mimicked the spins, and lowered their spinning kites to the ground in time with the disabled kites! The crowd laughed and loudly applauded, the judges scratched their heads …… hmmmm … rulebook …. under control? ….. crash? …. tick?? … grrr ……

The top teams gave it their all, but Tame Bird’s second place helped them very little — their .2-point advantage over Cutting Edge was nowhere near enough to allow them to take a hard-fought victory.

The next question to be answered was which team would rise above the rugby scrum and claim the third spot on the podium? Watnu wrestled their noisy North Shores to victory, topping Tame Bird by two points! This was the third-highest precision score of the week, and launched them into the final trophy spot.

This was the first WSKC held on American soil, and ranks as a huge success by any standard. While the arena was just shy of regulation size, no team suffered a boundary disqualification. Though the winds were not perfect for several days, each team got multiple shots at it, and conditions between teams did not appreciably differ. The travel and accomodation package was surprisingly generous, considering the tight US economy. 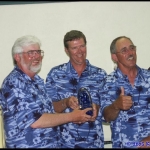 Dual-line kiting was turned into a sport in the US, and for the early years of the sport, US teams dominated the championship scene. In the early 90’s, teams from the UK and continental Europe were improving by leaps and bounds, and Tsunami’s 1994 World Cup win was to be the last crown for a US team, at least until Cutting Edge’s brilliant 2005 victory.

In 2006, the WSKC will return to the shores of the English Channel, and Cutting Edge will be there to defend their championship.