It is day one of the World Sport Kite Championships.

Airzone won the draw and flew first and last today. That means they called in for precision at 9:10 am and called out for ballet at 5:35 pm. On days like this, it is the judges that deserve a big round of applause. 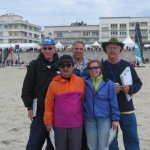 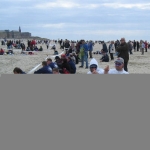 Midway through competition on Day 1, the wind came to a complete standstill. Team Neo, a minute into the ballet called for a check and the competition ground to a halt.

Precision had run smoothly but slowly though the morning and ballet got underway right after lunch. Sever breaks were called and it was not uncommon for teams to be backed against the up-wind boundary, our of space and out of air.

The flying was quite simply the best I have seen in years. It was great, but for the most part, it was not exciting. In some cases, you could have asked teams to swap music and the routine and choreography would have looked the same. In other case, the choreography was right on the beat, but the result didn’t make you tingle. I like to tingle when I watch ballet.

There was one unexpected highlight when Mary Boz pulled off her sweatshirt and accidentally took her tee shirt too. But I don’t believe any extra points were awarded.

Tomorrow we look for better wind and better flying.

Here are daily score postings. The top five in ballet and precision are held until the banquet for final announcement. Note that precision is listed first and ballet second.

The World Sport Kite Championships (not to be confused with the now defunct World Cup) is organized by AKA, STACK and AJSKA. Teams fly precision in the morning and ballet in the afternoon. They do this for three consecutive days and then their best two scores are averaged to create a final ranking.

New News for Day Two — Malaysia arrived in time for afternoon ballet. Their scores for the previous day are listed as “DQ”.

New News for Day Three — Light but steady winds. Good flying by everyone. Now we move to demos with final scores announced at the banquet.

Meanwhile, despite the light breezes, the single line show continues. And as the week unfolds, more and more stuff takes to the sky. 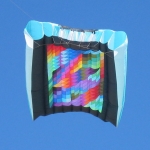 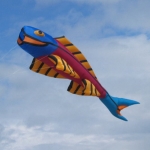 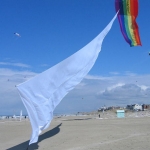 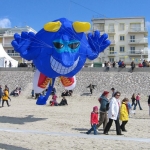 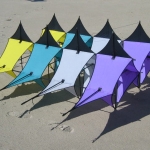