The winds are cranking here at the first World Sport Kite Championships in Berck sur Mer (France). And just to be clear, ‘cranking’ means 20 to 25 straight down the beach, sand swirling, and periods where it turns and drops over the buildings at the edge of the promenade to create turbulence one flier described as ‘food processor conditions’.

There is a sense here that this is something historic. For the first time, a worldwide competition is being organized by the flier associations – AKA, STACK (from Europe) and AJSKA (from Japan). And for the first time, a single common rulebook is being used.
Judges Illustration

Members of the International Rulebook Committee gathered before the event, spending more than 30 hours in important face-to-face discussions.

Conditions and goals differ between the organizations. STACK, for example, has about 20 judges who can meet for training and education together. AKA has more then 200 people who serve as judges across the country. So there are differences, but fundamentally, we have more in common and working together is a matter of learning, listening, and working out the kinks.

Some American fliers wonder why we might need to adjust ‘our’ rules to accommodate European practices. “We’ll never fly at an international event” they say. But there are a dozen Americans here in France that never expected to fly in international competition either. And, in the future, we hope to increase the event to include pairs, individuals and multi-line events.

As chair of the World Sport Kite Committee, it was my happy duty to thank our hosts and wish the participants well. “We wish the officials good judgment, the fliers good winds, and the public a good show” I announced. An hour later, the teams were in the air.

We’ve got an interesting mix here. From France it is Tame Bird, Element’air, and Overdrive. From the UK, we have Matrix Management and Flame. The USA sent Legend and 6th Sense. Germany nominated Watnu and Garuda. All the way from Japan is Speed. And arriving just minutes before their assigned flying spot was O’Flyer from Malaysia.

Being able to drop one performance is important out here. On day one, Legend suffered an equipment failure that cost them points (although not a DQ) in their ballet.

Element’air flew a strong ballet marred by numerous ground touches in the turbulent winds that resulted in high penalty points.

Speed left the field without even flying when a line judge waved the red flag during their window-check, signaling them out-of-bounds and thus disqualified. It was quickly determined that the judge had used the wrong flag and only meant to wave the yellow caution. Speed came back on, flew well, and then hit the boundary fence during their landing. So, ultimately they were disqualified again. And the second time, the line judge was on his mobile phone and forgot to wave any flag.

The judge was replaced…

I attended eight of the nine World Cups and found it interesting to compare flying styles in Berck to some of the great teams of the past.

High Performance of Hawaii performed frequently in Japan and actually released several videos there. So, it was not surprising to

see Speed arrive with five fliers and use the pyramids, starbursts, and ‘missing man’ maneuvers that Nagao and Augenbaugh perfected years ago.

Yasuma Numata of Overdrive flew many years with LungTa. Their four flier ballet is edgy and intense. But where LungTa sometimes became somewhat esoteric and hard to follow, Overdrive is polished and intense. Their pounding techno score and the sharp maneuvers remind me a lot of Aircraft.

The British teams all look a bit like SkyDance in the air, but are still working out the subtleties that made Mark, Jeanette, and Stephen champions.

And from the States, 6th Sense (Washington State) is fresh from the Experienced Class and flying their first Masters competition. What a place to begin! Their routine is more conservative than Legend (New York area) and it is interesting to contract east and west coast styles. We Americans would benefit from more head-to-head competition among our best.

So where do things stand at the end of day one??

The unstable winds provide a strong degree of difficulty and a lot of uncertainty to the performances. No one is at their best. Everyone is improvising.
Speed Illustration

In World Cup LeTouquet, Tsunami flew the first half of their ballet well, and then called “out” during their transitional landing. I saw that on the field today. Even more interesting, Overdrive completed a leading edge landing mid-routine, and then had their ground crew turn the kites over for a re-launch. Smart – and there is no rule prohibiting it.

I’d say that Overdrive has a strong lead with second and third up for grabs. But anything could happen in the next two days…

All day Wednesday, the winds blew an average of eighteen miles per hour. A low of nine, and a high of twenty-seven, divided by two is eighteen. Everyone performed well – no one flew great.

The real heroes out there are the officials. Judges Peter Fiedler and Mike Emery (STACK), Mike Gillard and Chuck Sigal (AKA) and Hideo Wakuzawa (AJSKA), plus Field Director Kathy Jarvis (STACK) and Scorekeepers David and Ginny Hansen (AKA) have been on the field and in the wind endlessly. And they have done a masterful job both technically and organizationally. I have never been to such a large and important event with so few questions and an absolute absence of controversy. 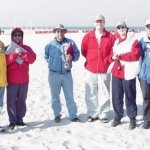 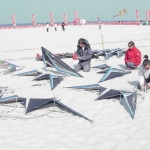 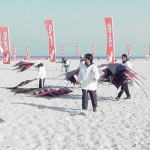 Keep in mind that final results are based on both precision and ballet, using the two best scores from three performances. I’ve been watching ballet closely, but can’t bring myself to observe a dozen team cascade maneuvers each day. My overall impression is that precision scores are fairly close, and that ballet will determine the winners.

On Day Two, Overdrive was again the best. But the wind dropped as they entered the field and it looked to me that their kites may have been over-vented for the conditions. Their performance was not as sharp as the day before. So instead of being ten points up, they may have been only two points ahead today. But as one competitor observed, everyone else was worse too, so maybe the ten point lead was still there….

After Overdrive, the two teams to watch were Garuda of Germany and Tame Bird of France. Both flew strong performances filled with bold tricks and well timed choreography.

Speed continued to suffer bad luck. This time it was a line break which brought two kites tangled to the ground. Whether they were disqualified under the ’45 second rule’, drifted out of bounds, or simply disrupted their performance for being down too long, the damage was done. 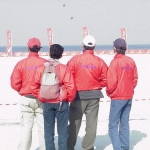 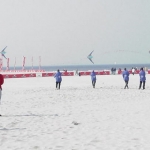 Legend hit the ground twice but continued to fly. Because of their proximity to New York and Liberty Park, they were featured in the local paper the day before. But no one on the team can read the interview. Sponsor jackets were presented to all competitors Monday and Lou Behrman is the only flier here that they couldn’t fit.

6th Sense turned in a purposefully conservative performance. I joked that their kites were never less than 50 yards apart. But they never touched each other or the ground making this American team probably the only one to suffer no penalties all day.

The conditions are difficult and everyone is learning. Yesterday Overdrive surprised everyone by asking the field crew to turn kites over during a leading edge landing and relaunch. Today, everyone did the same…

Spirits are high and the teams are bonding on and off the field. The three-day venue is working well. Let’s hope the winds drop tomorrow.

Speed came off the field with tears in their eyes today. But they were tears of joy and exhilaration. Finally – finally after two mishaps, the Japanese team flew the routine that they came to France to fly. It was spellbinding with sharp well-timed turns, intricate weaves, and plenty of drama. 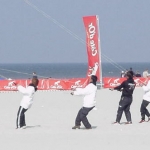 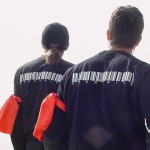 On one close starburst pass, the #4 kite snagged a line and broke its leading edge. The kite continued through the routine – for almost two minutes, without missing a beat. That’s fine flying when you need to compensate for response and overturn in one direction!

The routine include a five-kite landing. And showing the presence of mind and innovation that distinguish champions, the broken kite passed on the ground touch and instead hovered just above the sand in an extended stall. No sense risking a landing that might further damage the wing!

When the final musical note ended, the team dropped their handles and rushed into each other’s arm. The tears were true! And I’ve never before seen a Japanese cry…

Whether Speed beat Overdrive today is difficult to say. The French were extremely strong as well. Does pounding choreography get more points than sophisticated and well-timed five kite execution? We’ll know the results tonight.

Wondering what I mean by pounding choreography from Overdrive?? If you have a high speed connection, click here for a short video.

All week I’ve been reporting on the Berck winds. Today they were fickle – blessing some teams and cursing others. The Americans drew some of the best breezes and turned in their strongest performances of the week. But the winds would also drop suddenly or turn offshore and fill with turbulence without warning. Garuda and Tame Bird, who have flown well all week, did not enjoy their best day.

As I explained before, final standings will be based on the best two days of flying out of three performances. No scores have been released yet. The awards banquet tonight should be most interesting.

As I explained before, final standings will be based on the best two days of flying out of three performances. All of the raw scores, with the judges names attached are scheduled to be posted to the World Sport Kite Championship site in the next week. Meanwhile, here are the final standing and daily results.

Gerard Clement is the organizer of Berck. The worldwide sport kite community owes him and the city a huge thanks for making all of this possible.